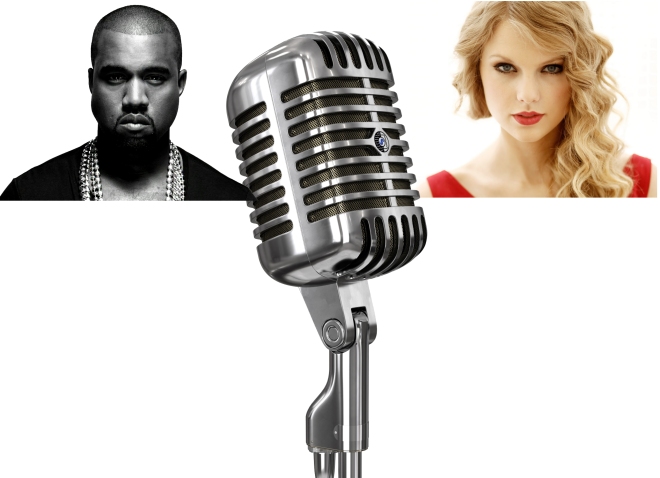 I started listening to rap way back in the day. I listened when LL Cool J was singing “Booming System” and Public Enemy was telling us “9-1-1 is a joke”. I listened to BDP, BDK, Kid & Play, Wu-Tang, MC Ren, Tim Dog, Das EFX, Tupac, Notorious BIG, etc. I listened on cassette tapes, made mix tapes and actually listened to the lyrics. I’ve always loved Rap/Hip Hop listening to Eminem, Snoop Dogg, Ludacris and everyone else.

Now it’s gone mainstream so much so that lyrics from Kanye West’s new album is in the news. You’ve got Taylor Swift fans up in arms over the lyrics, an online post complaining that the lyrics “don’t even rhyme” and Taylor Switft’s brother getting kudos for throwing away expensive shoes. Some don’t even understand the music, they don’t listen and understand the lyrics, they don’t marvel at the smarts of the lyrics. I’m not talking about Kanye’s song in particular but just rap/hip hop in general. Lyrics like “She told me no religion was the new religion ~ She said she don’t believe in God but her shoes Christian“, do listeners now stop and deconstruct it to understand it? It used to be that the lyrics were a way of telling a story. Now however you have Lindsey Lohan suing Pitbull for putting her name in his lyrics. Media and fans overacting over the lyrics of a song. When I saw the online post saying that the lyrics don’t even rhyme it made me sigh in exasperation. Yes all that matters is that it rhymes, smfh. Then I saw that Taylor Swift’s brother threw his Yeezy sneakers away. Wow, you’re so rich that you can afford expensive ass shoes and then just throw them away, you’re cool -thumbs up (sarcasm).

Yes Kanye said bitch in his song. Some had a problem with it but only because it was in reference to Taylor Swift. I have a problem with that because I’m pretty sure that he’s said bitch many times in many other songs but that wasn’t a problem. Rihanna sings “Bitch better have my money” and no one has a problem with it. Not only that but I bet the same people complaining about the use of the word sing the Rihanna song without a problem, hypocrite much? It’s a problem when it’s said about Taylor Switft but any other time that’s cool. This is such a non story but like I said rap and hip hop have gone so mainstream now and these are some of the problems when that happens. Jus sayin’